South Western Railway (SWR) is urging customers only to travel by rail if absolutely necessary on the planned strike days – Tuesday 21, Thursday 23 and Saturday 25 June – and throughout that week.

As a result of the Strike timetable, there will be no services run from Salisbury by SWR with Great Western Railway (GWR) also confirming that no services will be running through the City.

Customers should expect severe disruption and, if they have to travel, should seek to do so by other means.

This comes as SWR published their strike day timetable, which will provide a very limited service on the routes Network Rail have made available. The reduced timetable will see significant parts of the network closed entirely and those trains that are running will be far less frequent compared to normal.

Network Rail and more than 2,100 SWR RMT members are set to take strike action on Tuesday 21, Thursday 23 and Saturday 25 June, causing severe disruption. Network Rail will provide contingency cover for critical roles including electrical control room operators, signallers, maintenance and response teams, but will not be able to cover the whole day. 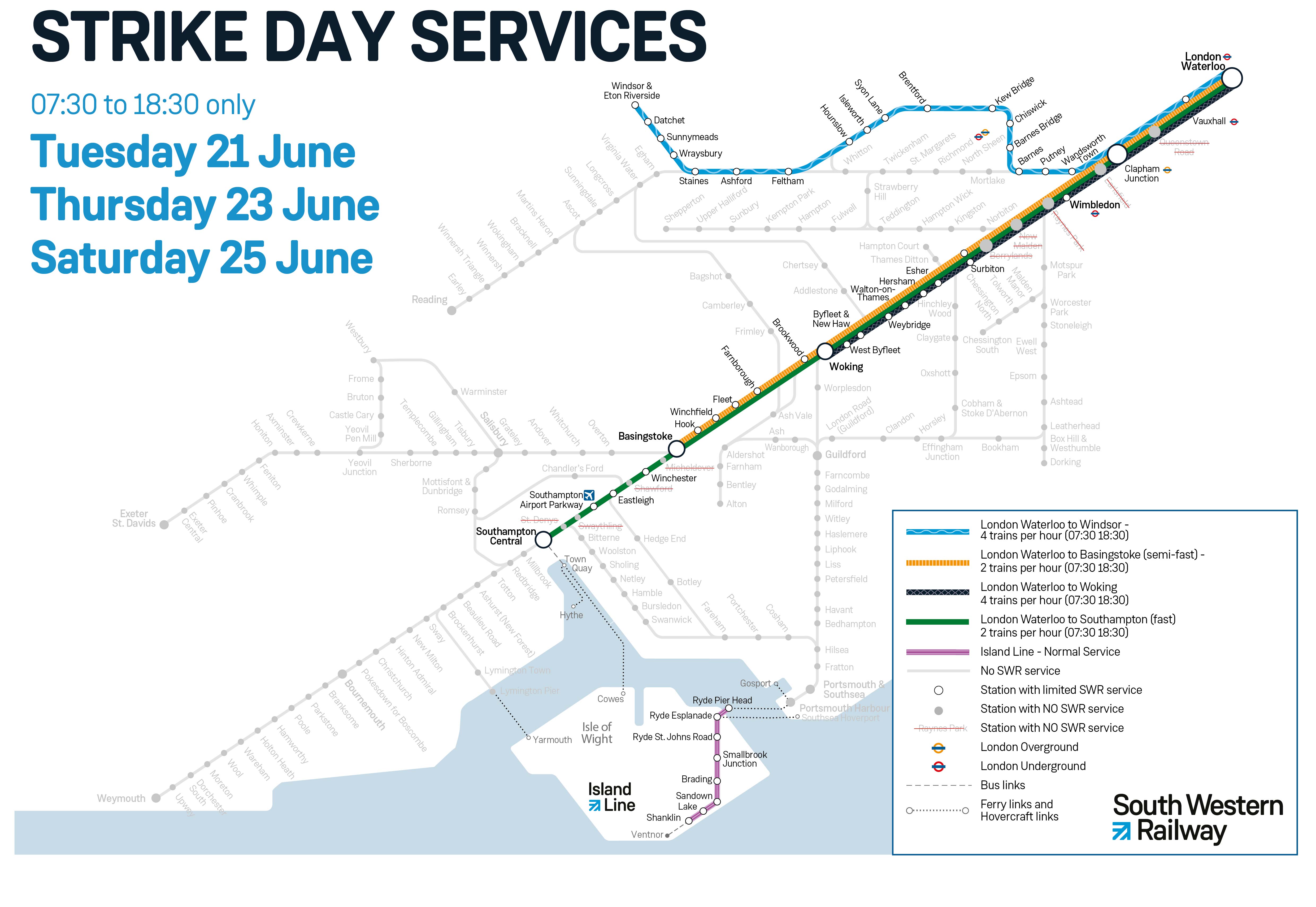 NB – Trains will not stop at all stations on these routes.

Island Line services will not be affected by the industrial action

There will be no SWR services across the rest of the network.

Significant disruption is also expected on Wednesday 22, Friday 24 and Sunday 26 June, when the network will not be operational before 07:30 and a Sunday level of service will operate throughout the day.

“The sheer scale of this planned industrial action severely limits the number of trains we can run and routes we can serve, which is reflected in the reduced timetable we have published today.

“With this disruption set to be so considerable, I regretfully urge customers to only travel by rail if absolutely necessary between Tuesday 21 and Sunday 26 June.

“I am sorry these strikes will cause such disruption and am grateful to our customers for their patience and understanding as the rail industry works to bring this damaging nationwide action to an end.”

“We’re so sorry for the disruption next week and we know how difficult this will be for our customers so soon after the pandemic. We’ve trained 250 staff so we can keep some of the busiest lines open, focussing our resources on the routes that can keep the largest numbers of customers and freight moving and serving vital locations such as hospitals. That said, we will not compromise on safety and the strike does mean that large parts of the network will be closed.

“We are continuing to work with unions to find a solution and will keep doing so. But we also have to be honest and accept that we have to change the way we work, to reflect the changes in society and travel patterns post-pandemic. Again, I’d like to apologise to everyone who finds their journeys disrupted next week and urge our customers to check before they travel.”

Customers are urged to check the SWR website for the latest information at www.southwesternrailway.com/strike

On the days of strike action, 21, 23 and 25 June, GWR expects to be able to operate the following service level:

GWR customers can find the latest information on their website – https://www.gwr.com/strike

mySalisbury is a community media and journalism project for #Salisbury and we want YOU to be involved. Check out our website for news, opinion and more

You Could Join The Team!

Huge Numbers for the Return of Walk for Wards https://mysalisbury.co.uk/2022/07/05/huge-numbers-for-the-return-of-walk-for-wards/

This website uses cookies to improve your experience while you navigate through the website. Out of these cookies, the cookies that are categorized as necessary are stored on your browser as they are essential for the working of basic functionalities of the website. We also use third-party cookies that help us analyze and understand how you use this website. These cookies will be stored in your browser only with your consent. You also have the option to opt-out of these cookies. But opting out of some of these cookies may have an effect on your browsing experience.
Necessary Always Enabled
Necessary cookies are absolutely essential for the website to function properly. This category only includes cookies that ensures basic functionalities and security features of the website. These cookies do not store any personal information.
Non-necessary
Any cookies that may not be particularly necessary for the website to function and is used specifically to collect user personal data via analytics, ads, other embedded contents are termed as non-necessary cookies. It is mandatory to procure user consent prior to running these cookies on your website.
SAVE & ACCEPT